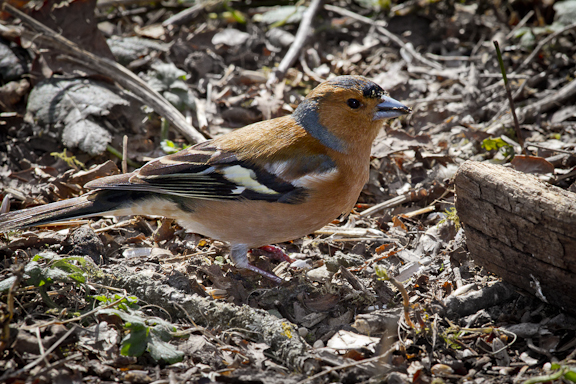 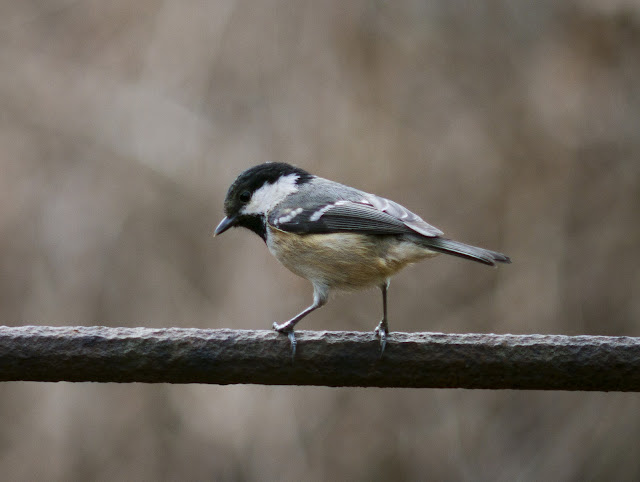 Coal tit(mouse); considerably shyer than the blue tit and great tit, it has been a regular during the winter, but has been absent now for several weeks. On examining these images really closely, I noticed the bird was infected with red mites which may have been its demise.

The month started on a high note with a beautifully warm day - a true herald of spring. By the third the red admiral put in an appearance and the long tailed tits had completed the nest by the wire fence. The male little owl was around - a much more deeply marked bird than last year, but the squirrel has been in and out of last years nest hole - as has happened in previous years. This creature is invasive and a menace to many other forms of nature. I had the the pleasure of doing a brief woodland survey with Lewis - a tree specialist and he pointed out the difference in damage on trees that had been stripped of bark by our small population of deer, but also by the not small population of squirrels. The Squirrels attacked and stripped lower and the deer higher and while some trees were immune others were at very high risk, including the incipient oaks. 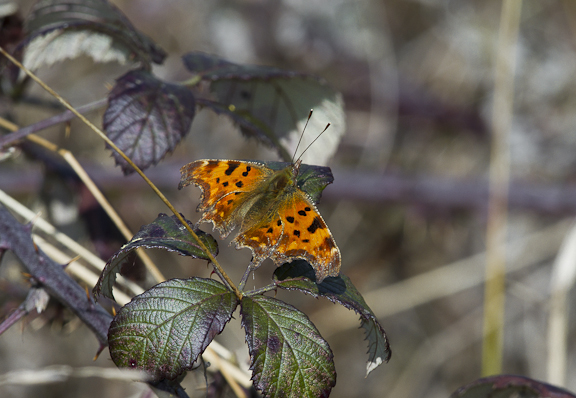 By the 11 the weather turned really warm and the woods really sprang to life. The feeders were becoming much less popular as the various pairs of birds got down to some serious courting. There was a small group of love sick jays making a whole squawking symphony of calls as they postured and displayed, head tufts flashing at what appeared to be a solitary female. The very welcome and reticent greenfinches were absent, though they were calling nearby and the coal tit of the winter months was completely absent. The comma butterfly put in its usual appearance - like clockwork it appeared in exactly the same spot by the willow  - this time it was a male.

Here is a trailer of the Little Owl Film, it falls into four seasonal sections - here is part one;

The weather has been substantially warm during the early part of this week and there has been a real change in the woods. Firstly, there have been three species of butterfly around - the comma, brimstone and a very ragged red admiral (at George Lane - the one I saw in January), but the birds have been going through their courtship rituals almost everywhere. The most pleasing were the pair of greenfinches I observed from inside the blackthorn thicket where the supply tent is erected - the female doing some vocal displays to the mail with moss in her bill  - the pair then flying off to a spot near the ditch that borders South of the clearing down to the stream. Then I saw a pair of greater spotted woodpeckers displaying in a very vocal way - sounds quite unlike its normal call a sort of cooing - this was mid way along the path up from the college. The blackthorn is still not in blossom.

Posted by Rodney Compton at 00:25 No comments: