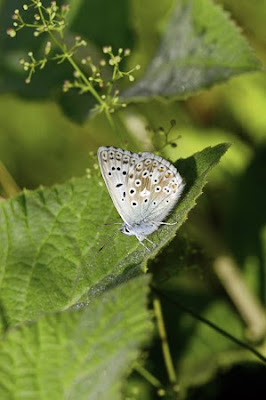 Wow! Wow! Wow, that is how I feel about another stunning first. If fieldwork teaches us anything, it is not to make assumptions, which is why I was in bewilderment at the sight of a very, very pale blue butterfly flying on Brook Wood Common, just beyond the isolated oaks. It was 5.15 p.m, the heat of the day was subsiding and the butterfly only fluttered a few yards before resting. Wings closed in the rank herbage, where horseshoe vetch was sprouting up, it was unmistakably a male CHALK HILL BLUE. Like the isolated orchid before, it shows that the area can play host to chalk downland species, but quite how I do not know. The nearest colony to my knowledge is in Shoreham, but there are also colonies in nearby Woldingham, Surrey. The tendency for colonial butterflies to peak in any given locality and therefore discharge members to the wind, is an interesting phenomenon. In all the cases of vagrant butterflies that I have recorded, there has been a Northerly progression (dark green fritillary at Ruxley 1978) - as with the more recognised migrants from abroad. On the 15th July the S. W. winds picked up to 15mph on the tail of an anti cyclone. This might just have been the conditions necessary to get a butterfly moving. The strong colonial bond that is generated between certain butterflies is almost certainly a product of pheromones. It is not unlikely that any given colony reaching a peak density will produce the occasional sport, or it might simply be that the butterfly was confused by gusting wind conditions. Similarly, but in a more generalised way, I have had local sighting reports of the Jersey Tiger, a moth I saw while in the West country in July - not far from its heartland in Devon. Its appearance on the South coast of the UK is consistent with a northerly movement across the channel, but how and why it is turning up so numerously in suburban London is open to speculation.

Butterfly status at the start of August.

Posted by Rodney Compton at 17:42 No comments: