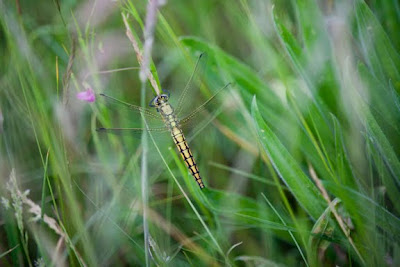 2.30-4.30 p.m A bright fresh day heralded yet another image of an imago on the first day of the month. This time it was a hawker dragonfly I found concealed among grasses, as the incoming weather front brought high cloud cover, finally concealing the evening sun and rendering the many fresh insects inactive.

The little owls have become very active, with frequent nest visits by the male, foraging for food from an area in and to the North of the allotment. Stag beetles became active on the 2nd and although they form a very important dietary component for the little owl at this critical time, I cannot verify particularly that they were being taken and fed to the young. The moon rose in it first phase in the West shortly after the sun had set, the thin sliver of light only serving to emphasize the unseen fullness of the disc.

1.00 p.m A longer transect around the fields West of George Lane brought me into contact with numerous meadow brown butterflies. The butterflies were concentrated into small sheltered areas that were out of the prevailing wind, with population densities of these freshly emerged insects running into scores. No sign of the white admiral yet.
I had my first sight of the small heath for some time, a group flew by in a courting chase - will need to confirm this. But surprise of the day was the sight of a singing skylark. 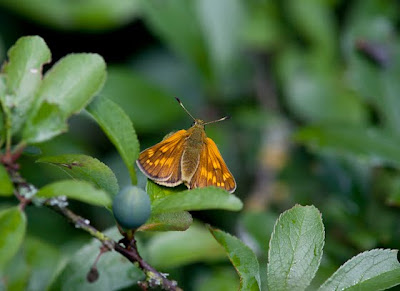 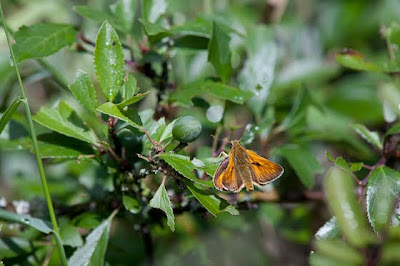 The weather has finally changed and we have had a whole day of concerted rain. My sunflower plants are growing strongly and the tadpoles have finally turned into froglets.

8.30-9.30 pm The rain has spurred a flurry of activity. Last night I sat in the allotment until late and the male owl kept me company the whole time, floating to and from the nest on silent wings with food for the developing young. The overcast evening was perfect for invertebrates and before too long a bat put in an appearance, perfectly outlined against the sky as it zig zagged across the allotment in the extended twilight.

11.15 a.m A long transect trip took me through the now damp woods to George Lane, where I saw a newly emerged comma among the flurry of meadow browns in the bramble at the field entrance. Later in the same area I saw two small tortoiseshells.

A night in the allotment after the rain (and the amazing rain bow that spanned the Southern sky) was prelude to the contradiction to my previous observations that the little owl will only take worms by day. Though it was hardly dark at ten and clear enough to see the outline and some detail, through the camera, of the owl and the worms that were being carried back from the overgrown garden to the nest site. So, not a complete contradiction, but an indication that the owl must use sound as much as sight in finding its wormy prey.

Early, after sitting in the woods South of the tree where the little owl is nesting and on my return home, I came upon a chiff chaff building at the very entrance to Elmfield. I can only assume it is a second nest.

The weekend was a washout with cold conditions and much rain. Fortunately these conditions prevailed for just one day passing quickly leaving the plants refreshed and supplied with much needed water.

A walk up to the trout lake yielded a surprise, the stormy wet conditions had blown what I thought was a stray tern inland and across my path, (which is actually nesting on the trout lake) - it had I believe been fishing in the Rookery lake. It coincided with the find of a blackcaps nest on the edge of the nettle clearing and the lovely sight of a pair of gold crests as well. The loss of my keys made my stay in the allotment longer than I might have preferred, but the sight of the little owls swooping across the allotment was a pleasure and so was the sight of so many moths including what was probably an ermine moth.

A walk through the complete transect up to George Lane confirmed the existence of the small heath in the large field where the skylarks had been.

To start, an overcast humid evening in the allotment with the little owls, saw a hatch of cockchafers and the male little owl flying around the flanking limes on the park boundary. Later, as the sky cleared, the activity slowed, but the clear sky and extra light gave the long evening an extension, which allowed me to observe the owls well after ten o'clock with reasonable, but diminishing clarity. The main diet was insect based, with no evidence of the worm predation seen on previous nights.

The weather has been very changeable for June with prolonged periods of rain. This has all added to the mix so far as the natural world is concerned, with the discovery by David of a purple hairstreak male, that appears to have been displaced from an oak in North Bromley/Fosters Park by the gale like winds, and the little owl digging worms at night from the overgrown garden in Normans Park due to the absence of flying insects at nightfall.

In the bursts of warm sunshine there has been a flourish of butterflies, including the first of the ringlets, now flying with the numerous meadow browns and large skippers in the woody clearings near the stream and beyond in the hay meadow at George Lane. 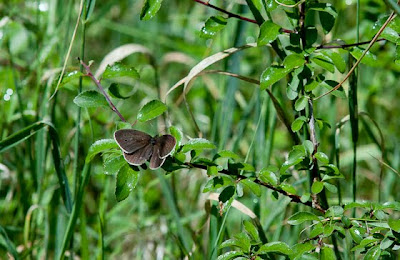 Evening came early, with the incessant rain of the afternoon slowly clearing to the East, leaving a glowering sky of dark clouds and sporadic showers. I got to the woods at about nine, just in time to catch a first glimpse of the two young fledgelings that the adult little owls had so assiduously raised over the past months. The owlets were in turns peering out of the tight nest hole in urgent expectation of a feed. The rain had been a godsend for the owls, as the evening was yielding a high level of insect activity, not least, the mosquitoes in my hide. Feeding went on in the dark and overcast conditions long after I left at about ten with the light impossible, but I got some great clips of the frantic activity, where now two adults were feeding the young, so marked in contrast to what had gone before on previous evenings, where the cold clear skies had slowed down progress to a snails pace.

Altogether a different night from the 20th, with clear skies and not cold temperatures welcoming the solstice, though the gusting West wind had returned and was now blowing through the trees above my head in a most concerted fashion. The little owl young gave a brief appearance in hopes of a meal, but feeding did not commence for a short while, when both adult birds came in with relays of insects. Starting earlier, I was able to establish myself and got some earlier footage at respectable camera sensitivity ratings of about 1250 ISO. The distance and seclusion of the hide in the undergrowth made my presence completely secretive and the owls carried on their crepuscular activity oblivious to everything but the task in hand. Even the calls of the foxes were ignored as the larger brown female and the smaller greyer male flew back and forth until dark.

The weather has returned to the status of flaming June after a damned grey day on the 28th in which it became as damp and cold as March and put an end to the mini heat wave.

Ringlets and purple hairstreaks are now on the wing in good supply and I managed to get a reasonable shot of the latter, though only by using an extreme telephoto. The male owl was in the oak in its sentry position, so I assume the young and sitting female still need protection in their nest hole by their steadfast guardian. 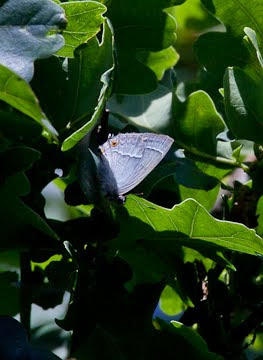 purple hairstreak
Posted by Rodney Compton at 18:57 No comments: