There are aliens in our woods!

A gradual evolution in colour renders the mature fungus orange. 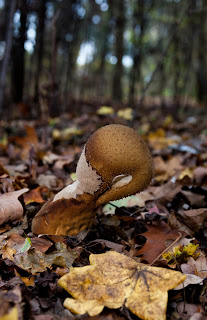 26.11.2011
Much of early November had been spent attending to pecuniary matters, but finally I got my head out from under the dark financial clouds and made a few refreshing visits to Hayes, via the common and woods.

Where the month had started dry, the arrival of rain and then a return to warmth, suddenly stimulated the growth of fungi and by the the third week in the month, the woods were festooned with the tiny red headed balls of the fly agaric. Blewetts, though were most prolific in the dank leaves of the coppice, but in the dryer parts, so too were field mushrooms, contrasted with the sole appearance of an elegantly small shaggy cap. Disguised among the newly fallen leaves, a group of brown puff balls seem to have grown to an enormous size - starting up, as large as a child's fist and as long as a forearm in strange distorted forms.


The branches of blackthorn and hawthorn, now free of leaves, stand out with hundreds of small round berries. Deprived of moisture, this is no swollen harvest, but because of the wonderful blossom set, this phenomenon of miniature fruits is compensated by sheer numbers and enough for any amount of birds or fat squirrels. 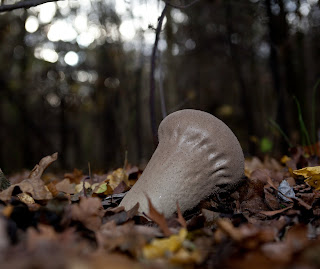 Biking out of the far exit to Norman Park by the track, I came across a beautiful group of pristine parasol mushrooms. The turn in the weather might be too much for this late show of fungi, but Westerly winds still prevail and the heating will remain off until the wind switches around to the North East. 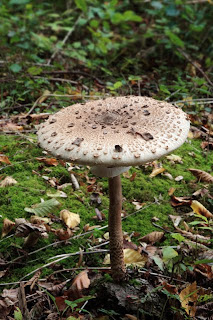 Posted by Rodney Compton at 16:48 No comments: