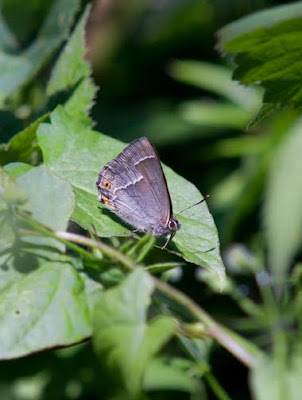 An early morning foray at seven into the clearing, after a rather barren spell in the allotment looking for owls, gave a rich reward, which was the sight of a relatively sedentary purple hairstreak on the low branches and plants surrounding the small oak - where I set up my hide last winter. It leads me to suspect the purple hairstreak is far more prevalent and widespread than I first thought.

The month turned on the hottest day of the year so far, but by the 5th, rain had set in from the West, where I had been working and where I saw my first Jersey Tiger for a few years. The owls are out of the nest and a single well fledged young owl is being fed by the adult female from familiar perching posts around the allotment and in the host tree. The fate of the other owl is subject to speculation, but it was ready to fly a few days prior to my return to filming. Like much of the footage this year, including the mating sessions I filmed in Spring, this rather long unedited clip was shot in the gathering gloom of nightfall, something older video cameras were simply unable to do.


The weather is swinging from hot to cold and then back again. Last night was wet and cold with few flying insects, but today has been a mixture of rain, clouds and warm sun, with a strong blustery wind from the West.

The purple hairstreak colony is my current preoccupation and seems to stretch throughout the woods, wherever there are oaks clumped together in small groups. 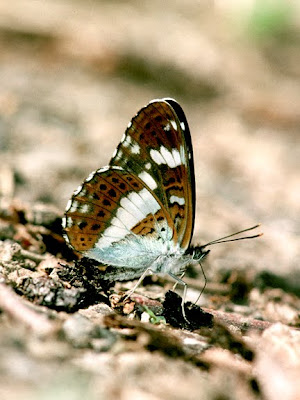 A trip to George Lane proved very worthwhile in determining the extent of the purple hairstreak colony, which stretches the whole extent of The Rooker Estate from Norman Park to George Lane. No doubt its prevalence on Hayes Common, as recorded in the nineteen eighties and before, means that the butterfly is common throughout the entire oak wooded area. The white admiral put in a fleeting appearance in the semi cleared ride I worked on in the winter that is diagonally across the sweet chestnut coppice. I also came into contact with the Bromley butterfly recorder for Well Wood, who spoke of seeing the white admiral more numerously last year. He also explained that there had been an attempt to create rides through the woods with a view to encouraging the white admiral. He also observed that the white admiral had been on the wing in the woods from the third week in June this year - more or less as expected for such an advanced Spring and Summer and consistent with most other species.

This what Chalmers Hunt said in 1960: The white admiral has spread throughout the county in the last thirty years, reaching a peak in about 1954. It was present in Joydens Wood then and later in the early 1970's, when I recorded it - there is no reason to think it was not also present in Bromley, though the earliest contemporary records are from about ten years ago.

Evening: The wet blustery conditions finally subsided into a calm evening and as a luminous twilight descended under a bright moon, the adult owl was once again coaching the remaining owlet in perching and flying skills. The owlet was supplicating and bobbing for food, but with little effect and at one point the adult almost dive bombed the young bird to get it off its safe perch in the larger oak tree.

Am in the grip of summer flu, but have managed to keep tabs on the owls and have also done some work on the Purple Hairstreak and White Admiral, the former now appearing everywhere and the white admiral still sparce and confined to the chestnut coppice. A couple of mornings ago I did a four a.m stint and witnessed a small drama between the sentry little owl and a fox. the bird flew to a perch twenty meters away and blasted out a series of alarm calls - a sharp repeated tuc, until the danger had cleared. It is obvious that the ground feeding habits of the little owl predispose it to fox predation, hence the alarm.

A steady light rain swirled around the allotment in the gathering gloom of twilight. The sentry owl sat sheltered but alert in the smaller of the two oaks in one of the many cavities that have developed over the years. I observed from the comfort of Andrew and Peter's shed, sitting on the car seat that the boys have installed. On my departure the sentry owl flew to the horse chestnut and this was shortly followed by another, which on observation I realised was the young owl, now free of its furry cap and demonstrating the white V of the adult owls.

The butterfly and moth populations are finally being affected by the hot weather and are appearing in more profound levels than the colder wetter days of the previous weeks. I was twice in contact with a very large Noctuid, probably an old lady moth, which was on the wing around the entrance to the allotment and yesterday, during our charity day, a purple hairstreak turned up on the door frame. The owls are still active in the allotment. Last night, the 26th, the young bird was harassing the adult for food with very little effect, as the adult was flying from perch to perch each time the young bird approached. It is a hard lesson, but there were several large moths on the wing and a few beetles, though I have not been able to observe what the latest diet is.

A morning visit in the cloudy condition today showed just how much things have advanced since last week. The wild flowers in the clearing are shoulder high, with commas and hedge browns feeding from the abundant thistle heads. A purple hairstreak tumbled into the grasses at my feet, taking liquid from the still damp herbage before fluttering off. 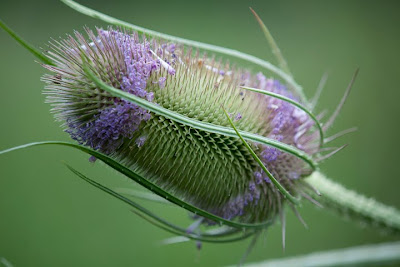 teazle head - a good sign for winter and goldfinches 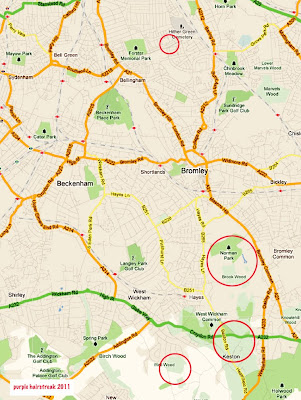 Distribution for the purple hairstreak butterfly:

The local fields and woods are alive now with invertebrate life. The white admiral was out of sight on my transect today, but more and more oaks have revealed populations of the purple hairstreak, the common blue is now back on the wing in its second annual phase.

Butterfly status at the end of July
Posted by Rodney Compton at 10:41 No comments: