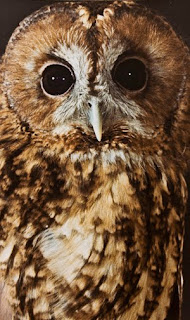 More by sound than by sight, and with a great deal of urgent fuss, our nights are being disturbed - not by the reveling vandals on an overnight stint, but by a very noisy Tawny Owl. Whether the arrival of the owl is coincident to the warm weather, or coincident to other factors is a mystery at this time. Why is it here now and not before and if it is setting up a territory, what is the attraction. Is it seeking certain prey, is nesting in the locality a possibility?

The hot weather has receded back to the continent and the trees are shedding leaves in an abnormally rapid way. I surmise that the sudden drop in temperature and the dessication from the mini Indian Summer is responsible. wandering through the allotment, I came upon the day's only butterfly; a speckled wood caught in a web. Remarkably it was alive and after untwining it from the spiders threads, I put in a laurel bush, from where it took flight on the prevailing gusty breeze.

The weather has retained some of its summer character with with warm conditions but with a strong prevailing wind. Nevertheless, on a trip to the National Trust acerage at Petts Wood I saw a rather scruffy peacock taking the afternoon sun. Little fungi activity though after such a long period in which rainfall has been very limited. The last few days have been typically autumnal, though many trees. including the birch outside my window, have hung on to their leaves in wonderful fashion. Nothing has been typical about this years climate - record spring warmth, summer rain and an Indian summer period to break all records. Where it leaves the wildlife is open to conjecture, but I suspect that there is an agency at work beyond so called Global Warming that is adding an element of instrumental consciousness to the natural patterns of the past. 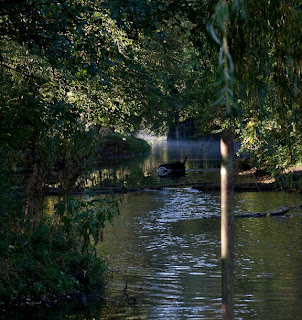 A charm of goldfinches adorned my roof at eight. They were taking the first rays of the sun and flew to the birch on my showing at the window. I was preparing my very early morning start - an event, on this occasion prompted by an invitation to walk a dog, which soon found me, on this crisp autumn morning, walking across a frosty meadow towards an old friend, The River Cray. I was among the first to arrive, but the area soon started to fill up with dog walkers. The enchanting sight of a local river, with normal levels of water flowing, was a treat. Following directions from my absent friend (car problems), I walked towards a quieter spot along the bank. The mist hung low in the more open stretches of the river in a delicate grey haze. the natives were not at all as I had found them before (1970's) and it was smiles and hello's all round from the first few dog walkers I encountered. At the iron bridge, to which I had been directed, I saw a lovely sight, not the kingfishers I had been told of, but a grey wagtail delicately feeding among the sticks and leaf debris of the shallow flowing river. I also disturbed an egret on the way back - it was perched in the middle canopy overlooking the river.

And finally to round off the day, my butterfly report: one Speckled Wood and one male Holly Blue emergent prospecting the oak tree line inside the field near the college bus stop, looking for one of these. 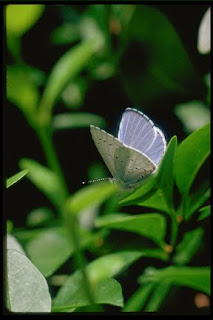 Another bright morning down by the Cray River, where I finally saw the kingfisher. Again the people out with their dogs was the biggest deterrent to more footage, but I was not so upset and had to accept this was how it was, but the banality of the conversations I overheard was confirmation of my worst fears about people. 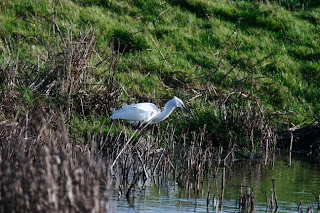 The month ended in a haze of mist and bright sunshine, just as it had begun with my pursuing of the kingfisher on the river Cray at North Cray Meadow. As it had been at the start, so it was at the end, lots of sights, but none of the sedentary bird. The compensation was a chapter and verse experience of the grey wagtail - filmed for minutes on end, delightfully hopping and dipping across the top of the Five Arches weir and on other parts of the sunlit river.
Posted by Rodney Compton at 21:03 No comments: