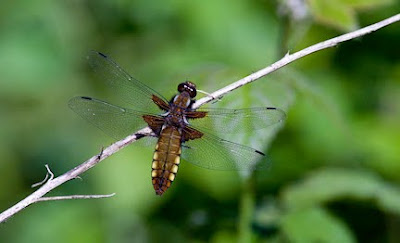 1st May 2011 - a late morning start at 9.00 after a late night. The weather is continuing, the East winds keeping the Atlantic systems carrying rain well to the West of London. The long tailed tits are feeding young and talking a heavy toll on the larvae from the trees along the woodland edge to the common beyond the allotment. Venturing into the woods by the direct route, I disturbed a deer, but this time a male feeding in the hollow at the eastern edge of the clearing. This morning I was taken as much by surprise as the deer and missed filming it as it elegantly hopped into cover - a lovely experience. I had an intuition to get the camera set up on the tripod, but I had business with the wren's nest, which I approached by the ditch. I was surprised the bird was sitting, because, by estimation, there are only five eggs in the nest. After a brief spell, the bird fluttered off into the undergrowth and I made my retreat. Rounding the edge of the clearing by the willow tree I saw the deer again, in exactly the spot I had filmed the female three weeks before. It did not wait around despite my evasive tactics and had long gone by the time I had set up.
The blackbird was off the nest and the young dormant, but I saw a pair of chiff chaffs mating and assume they are the pair from the East end of the clearing, who have now shifted nest sites, but that is conjecture, because there are a number of leaf warblers in and around the clearing.

In previous years on this day:

1984 Working at a thrush nest in the Upper Meadow, Shoreham, I had a weasel scramble through the base of the hide. I reflected that sitting in the quiet woods is a wonderful tonic and redolent of my 2011 activities

1994 Walking up from the farm to Preston Hill, I saw that the bluebells were giving a fine show. Passing back by my favourite downland bank, overlooking the Upper Austin Lodge Golf Range, I found a small colony of green hairstreaks and one of grizzled skippers.

Morning went as planned filming the feeding exploits of the long tailed titmice again, this time from a different point of view. The public nature of the setup put me in touch with two new contacts, Colin and Hugh, both excellently informed bird watchers.
Afternoon was spent in the clearing where I was filming and photographing a Libellula Depressa female dragonfly (top), using the most unlikely camera setup I could ever have imagined (500mm f4.5 plus 1.4 converter). On the way back I saw a magpie around the tits nest - so far the nests in the clearing are still intact.

On this day in previous years

1989 This was the first day after leaving Illustrations, that I was able to get out and about on the downland banks above the cottage at Lower Austin Lodge Farm, Eynsford. I felt a great sense of relief, not merely because of giving up my job, but because the winter was over and the late snows had receded. Natures reaction to having been put in the freezer is explosive - spring can vary by a month quite easily.

1994 Follows weather pattern of 1989 after snows of April an explosion of growth.

Afternoon in the clearing - the blackbird young are out of the nest and sheltering in the blackthorn thicket. The collar doves are still together and the nests of the song thrush and blackcap are intact. I saw a male bullfinch flying into the thicket along the park, confirming the idea of an active nest site there. The chiff chaff's are almost certainly nesting with the male calling from the denuded oak tops and the Libellula is still in the clearing. The great titmice are back and forth and the young are bulging from the nest along the fence.

Early morning, arose to find a light frost had affected some of the plants in the allotment, the first for a month. The owls are still incubating the eggs, but there was plenty of action with the long tailed titmice and also a nest box full of blue tits. I put the nest box on the back of the shed from where it had been discarded and like the other boxes on the allotment it was taken advantage of by a pair from the small army of blue titmice around the allotment. There is a family of greenfinches feeding together by the allotment gate. 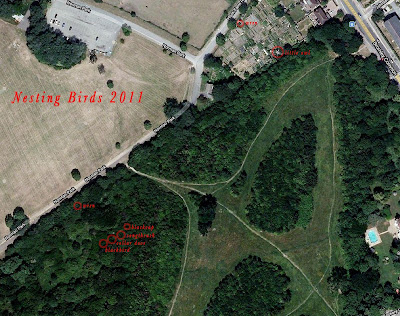 Previous years on this day

6.00 start, and without leaving home saw a mangy limping fox looking for food scraps over the road and a pair of prime goldfinches on the fence. Quiet in the clearing, songthrush sitting fast and blackcap as well, male wren is singing as is blackcap, hedge accentor, and chiff chaff over towards the westerly edge of the clearing.

Previous years on this day

1986 hedge accentors completed nesting at Shoreham and Song thrush still sitting on eggs (as is the bird in the clearing). Cowslips doing well in Upper Meadow (as they were at Stanstead yesterday) 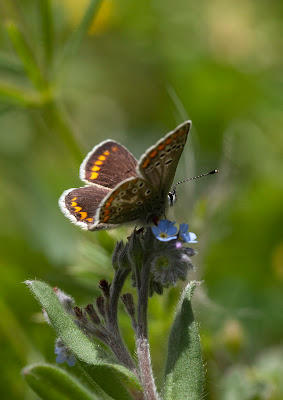 A round trip of the nest sites and to beyond the stream brought me into close contact with the male deer and another encounter this side - East of the stream, both animals were, like myself, in the depths of the thicket. The allotment was damp after the first notable rain since Good Friday and there was a brown argus imago just near the Southerly edge, the first this year.

A fresh start after the overnight rain - woods beautiful and vibrant. Song thrush still in the early stages of feeding fledglings. Blackcap sitting firm, chiff chaff singing in the west of the clearing, where I presume the birds have rebuilt and the female has laid. Got a lovely present from Lilly of 11+1 daisies in a pot. A single male common blue on the wing in the allotment with the brown argus. 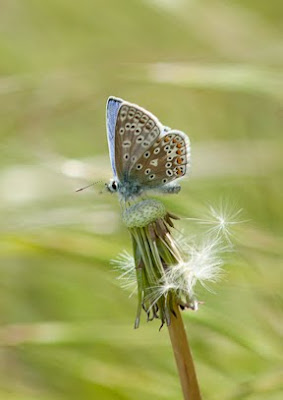 Woodland activity was high with lots of young birds being fed out of the nest. songthrush and blackcap still sitting fast.

Songthrush young now absent, presumed flown (no sign of predation) confirmed by a much darkened and infertile egg remaining in the empty nest. Wren in shed feeding young, but wren in clearing still incubating on the 13th. Blackcap feeding young - chiff chaff male still calling around the clearing.

Many carpet moths and other geometers. Damsel flies in profusion.

The day started blustery, not ideal conditions for film, least of all when using a 500mm telephoto. I started at about nine and sat through until lunchtime or just before, about twenty feet away from the wrens feeding their young. The nest is in a top corner of an open porch next to a shed, so as public as can be. The birds were undeterred by me, if a little reticent at first and I got a nice sequence of the birds coming and going. 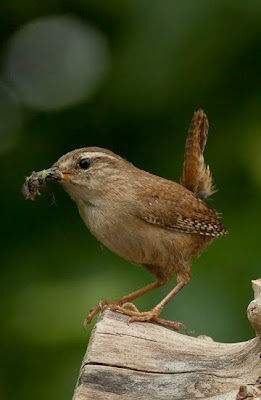 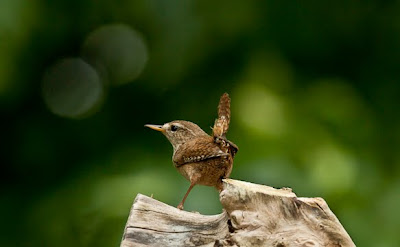 Another two hours with the wrens again revealed a diversity of insects being fed to the young in the shed nest. The wrens in the woods look as if they have hatched their young. The blackcap young are now out of the nest in the blackthorn thicket and being fed in the bushes by the adult birds. This is the last of the five nests in the small area and is represents a high success rate.

A beautiful evening, but a small tragedy - the wrens nest, in the woods along the perimeter, was predated. The lining and its contents having been dragged from below by perhaps a rat - a squirrel would almost certainly have made more of a mess. This is the last of the spring nests that I found in the clearing - it was at least a week or two behind the wren in the shed in terms of incubation.

The park was a mess of strewn bottles and McDonald's bags, which I did my best to clear away. It reminds me of modern art, shitting upon objective aesthetic standards - an impotent childish rebellion against a God that cares nothing for their fate.

An early start at 5 a.m to observe the little owls. The male was in the allotment around one of the central plots, (the midwife's), possibly feeding on the ground, but its activity was scant, relative to all the visits the oak was getting. This ranged from the mandarins courting, blue tits feeding and through to a lovely green woodpecker and pesky pigeons looking for nest sites in the oaks many cavities. The allotment was alive from about seven when the sun really arrived to bathe everything with yellow light and place the shadows in extremes of reflected sky blue. The wrens were feeding frantically, at the rate of two visits every four minutes, but all manner of other garden birds were there foraging and to cap it all, I found a newly emergent small tortoiseshell on Dennis's plot.

Later through Rookery Woods I came across, several very early newly emerged butterflies: speckled wood, large skippers, meadow Brown, brimstone, to go with the earlier small tortoiseshell. Everything is so dry, with the stream a pedestrian channel of large muddy puddles.
Posted by Rodney Compton at 13:09 No comments: